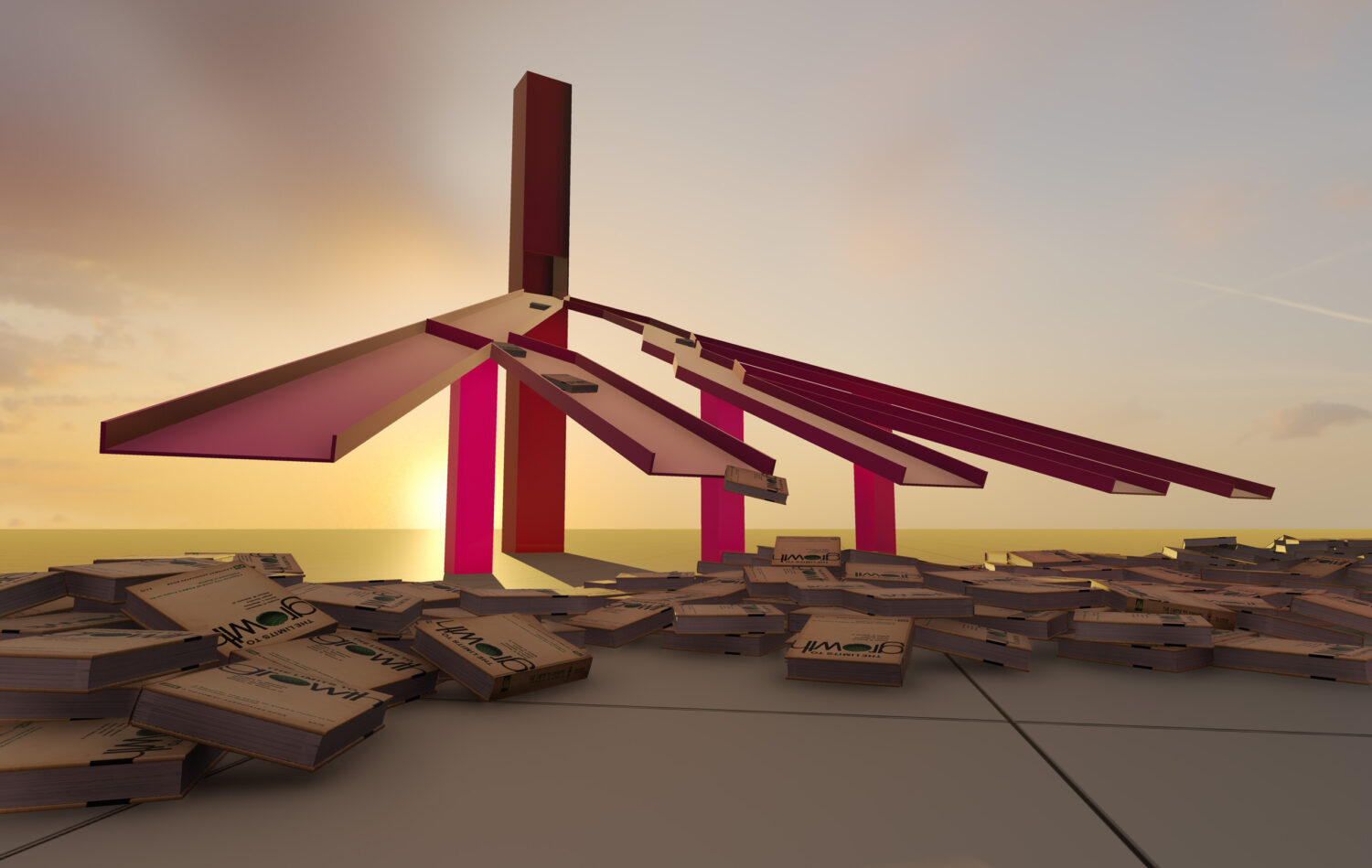 ›Societies of Speculation‹ is an ongoing virtual reality (VR) installation project by Bernd Hopfengärtner & Ludwig Zeller that immerses its visitors in a series of socio-cultural environments of speculative thought and practice.

What does the way we speculate about the future tell about us?

It is a fundamental aspect of humanity to project one-self empathically into other beings, to navigate mentally through spaces, to relive memories and to speculate about possibilities that are neither existing in the present world nor in the past. While all of these abilities are constitutional to man-kind’s socio-cultural condition and its technological capacities, one specific variant of self-projection is often seen as the most intriguing: the speculation about the future.

Even more than the above mentioned forms of mental self-projection, the imagination of the future is not just a one-dimensional thinking tool but instead a complex societal, epistemological and semantical recursion of hierarchy, values and world views. While the principal interest in the anticipation of future events has been shown to be a constant since ancient times, its theories and practices have been adapted according to the discursive changes in philosophy, science, technology and politics. To look at how a society approaches its future means to look at its intrinsic epistemological and social structuring.

›Societies of Speculation‹ stages a selection of historical techniques of predicting and manipulating the future as a series of immersive VR room experiences. We understand VR as a technique to create a deeper understanding of situative spaces and their atmospheres, to create presence at and immersion in spaces that are informed by future thinking. Our goal is not to create a visual documentation of past events but to offer a kind of spatial memory of having been there.

Besides that rooms shown below, the finished installation is planned to include the ancient Greek’s Oracle of Delphi, the simulated micro-futures of Wiener’s Anti-Aircraft predictor and some others more.

„The future requires all nations on earth to believe in similar predictions.”

The United Nations Climate Change Conference in Kyoto was the first climate conference to outline a greenhouse gas emissions reduction obligation for most industrialized countries. The effort that is put into these conferences is both extreme in regard to its scope, since all nations of the world are asked to participate, and its uncertainty, since the foundational climate forecasts reach farther into the future than most other areas of foresight. Never before has the world community invested such an effort and been so successful in negotiating common, far-future goals that need action in the present day. Threatening predictions through simulation models have been a key driver for these efforts. 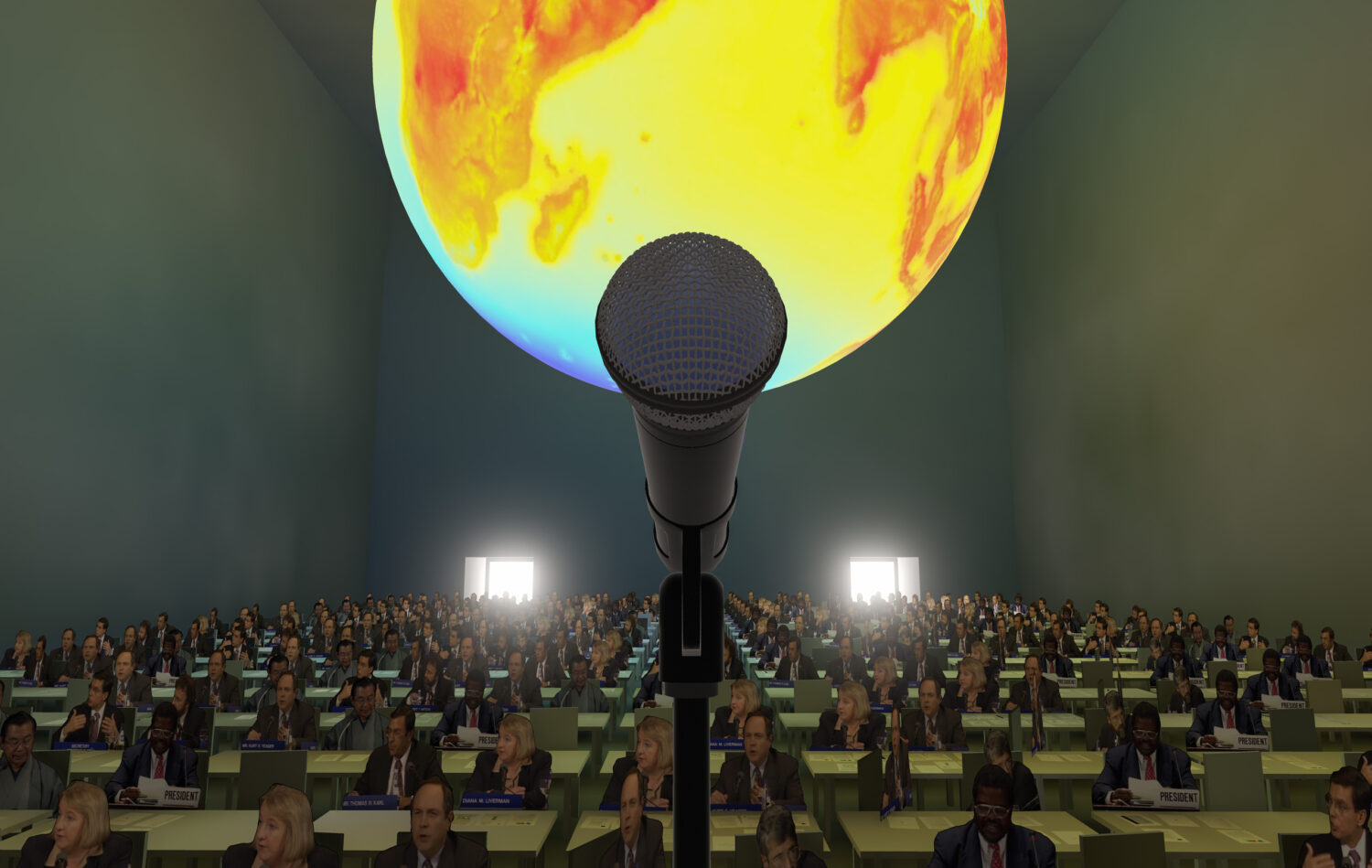 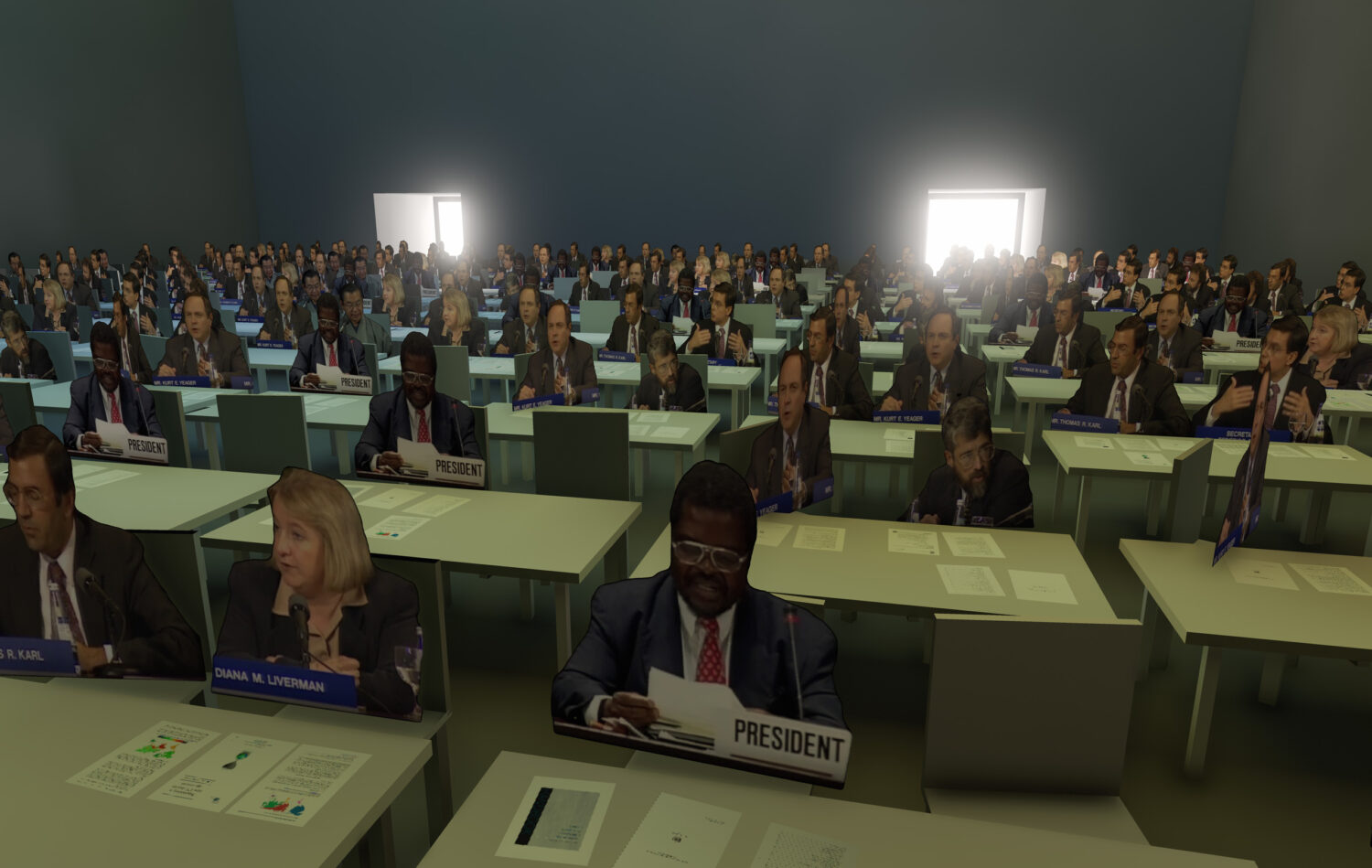 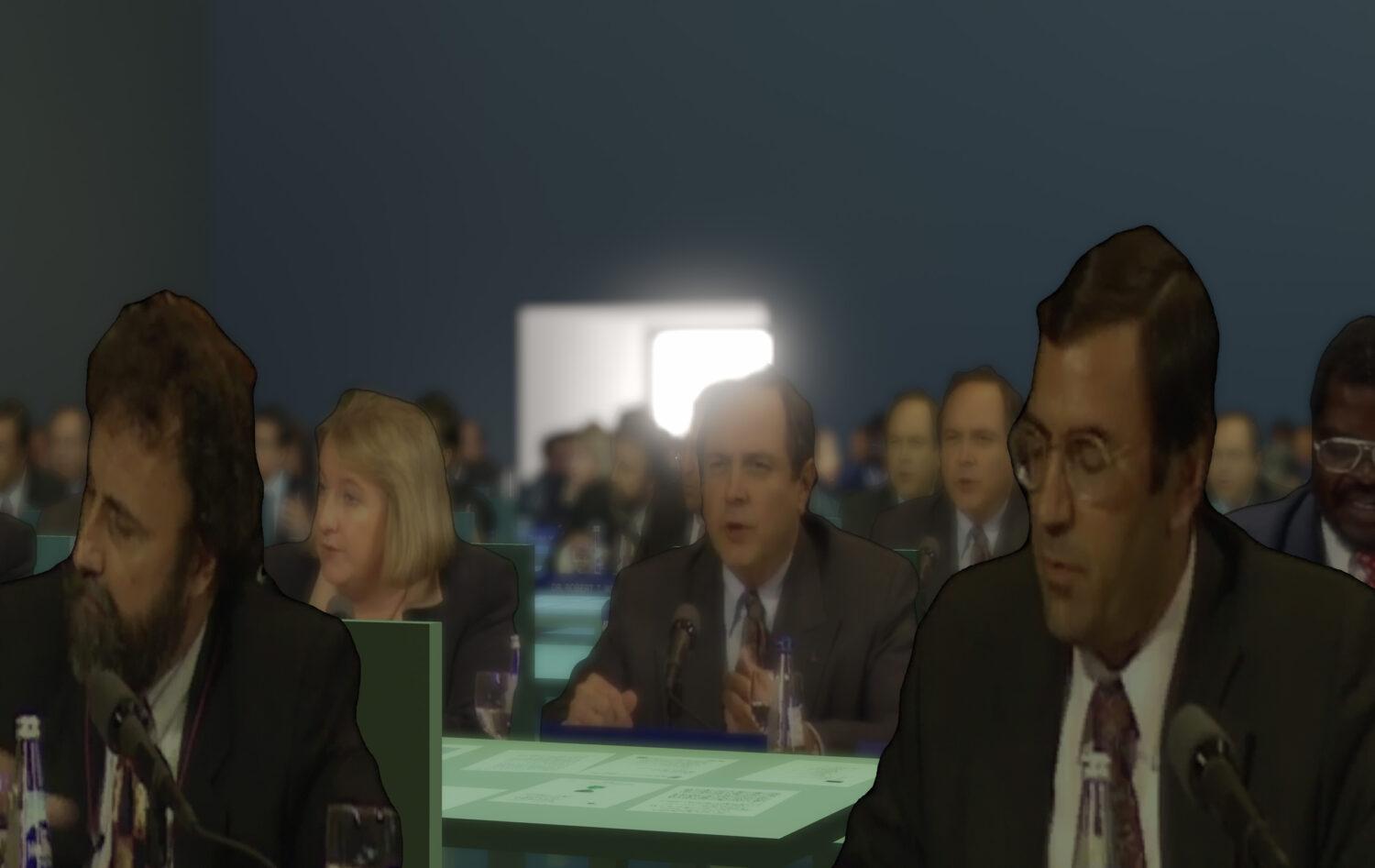 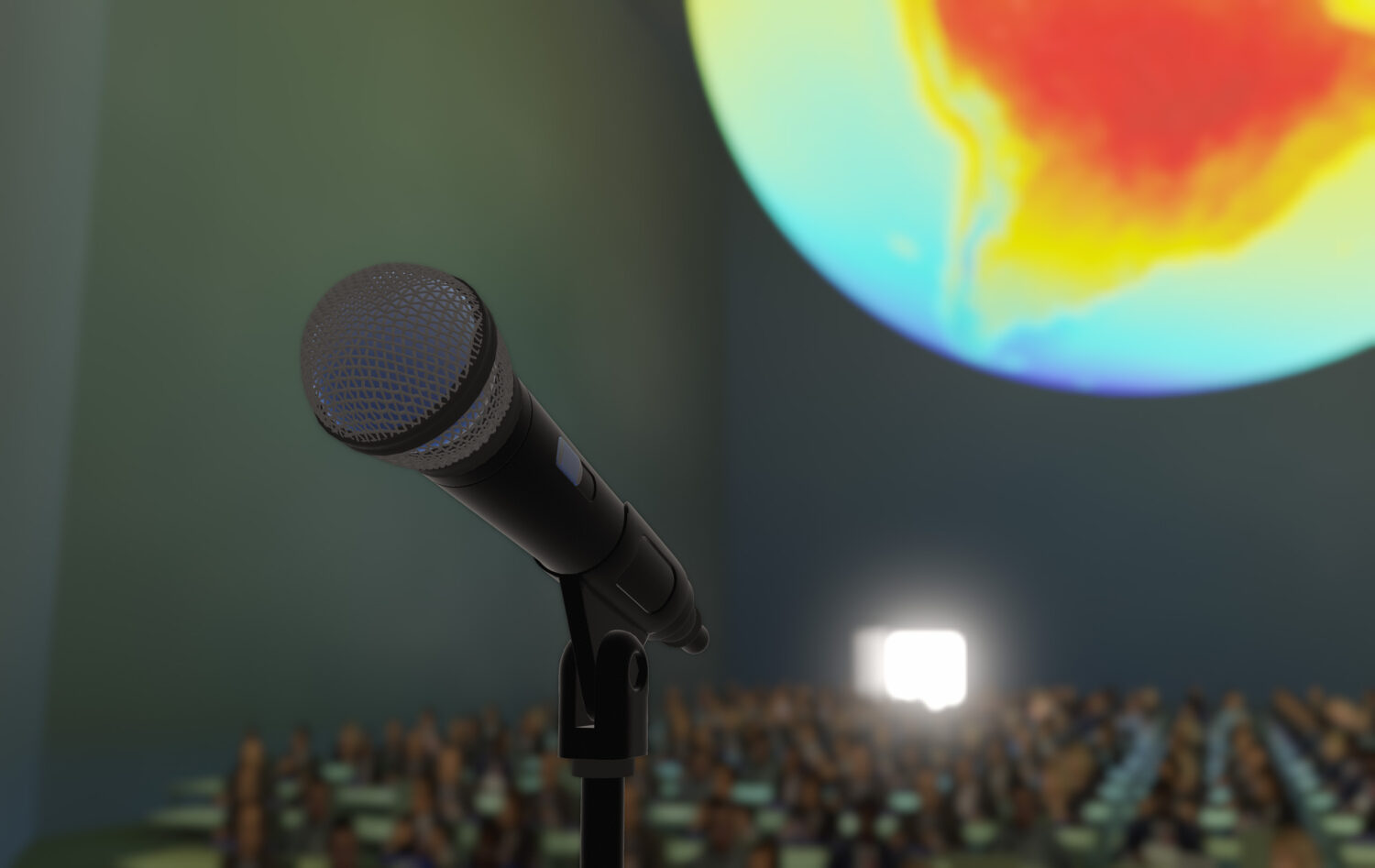 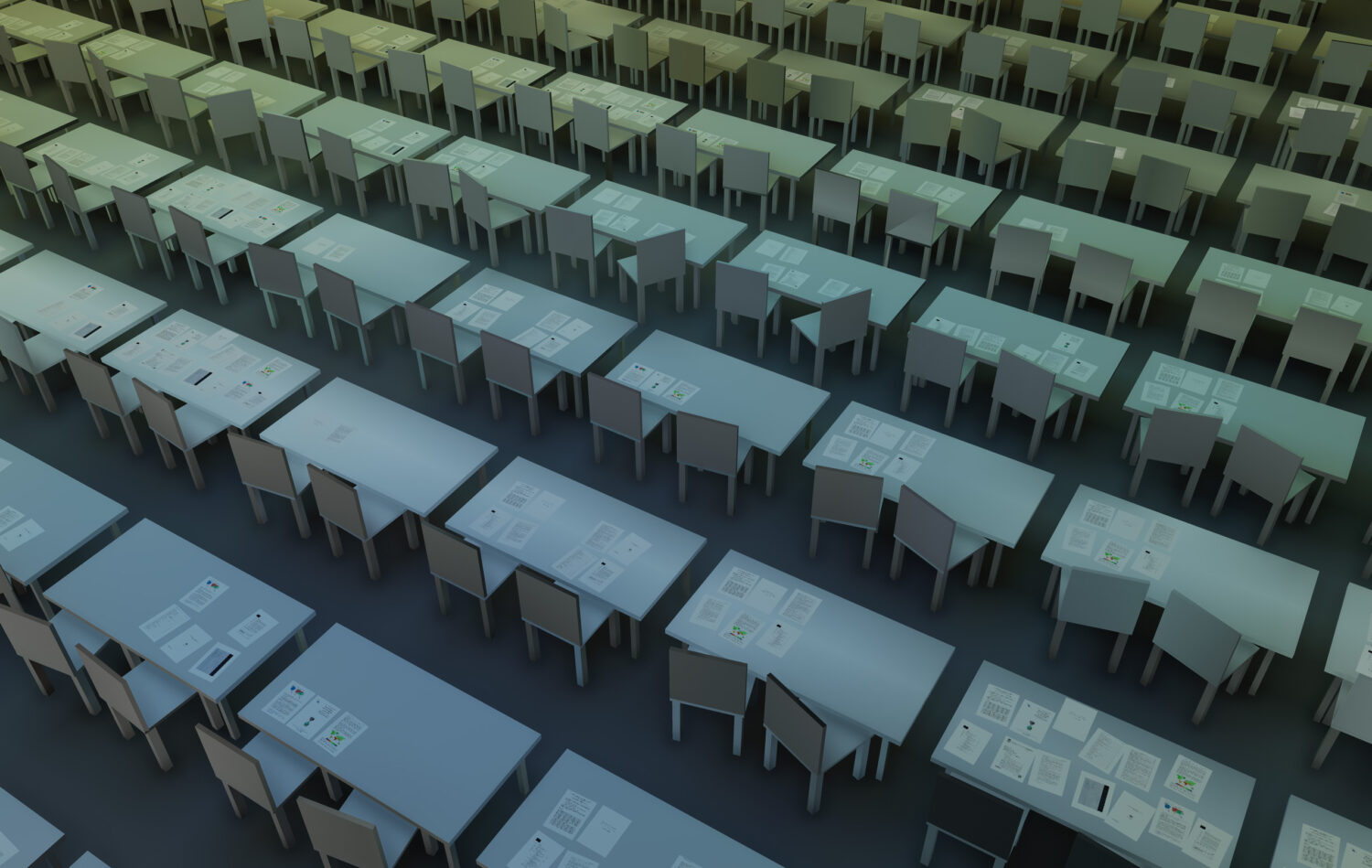 „The future needs every heart to dream,
every head to plan and every hand to build.”

The German-Austrian journalist and futurologist Robert Jungk invented ‘future workshops’ as a form of participatory futuring. Inspired by the creativity techniques of the think tanks that Jungk discovered on his travels through the U.S. during the 1950s and 60s, he wanted to make futures thinking accessible to all people. In his eyes democracy wasn’t complete yet. It still had to develop the ability to foster and integrate every citizen’s personal ideas into its agenda. For most of his life Jungk dreamed of integrating future thinking as a process, an attitude, and a culture of everyday life that should become part of our education, daily routines and democratic practices. What are the mechanisms that prevent his dreams from becoming a reality? Can a society overcome the century old split between experts of futuring/consulting and their clients? Can we as a society take the burden of being self-responsible for our imagination? 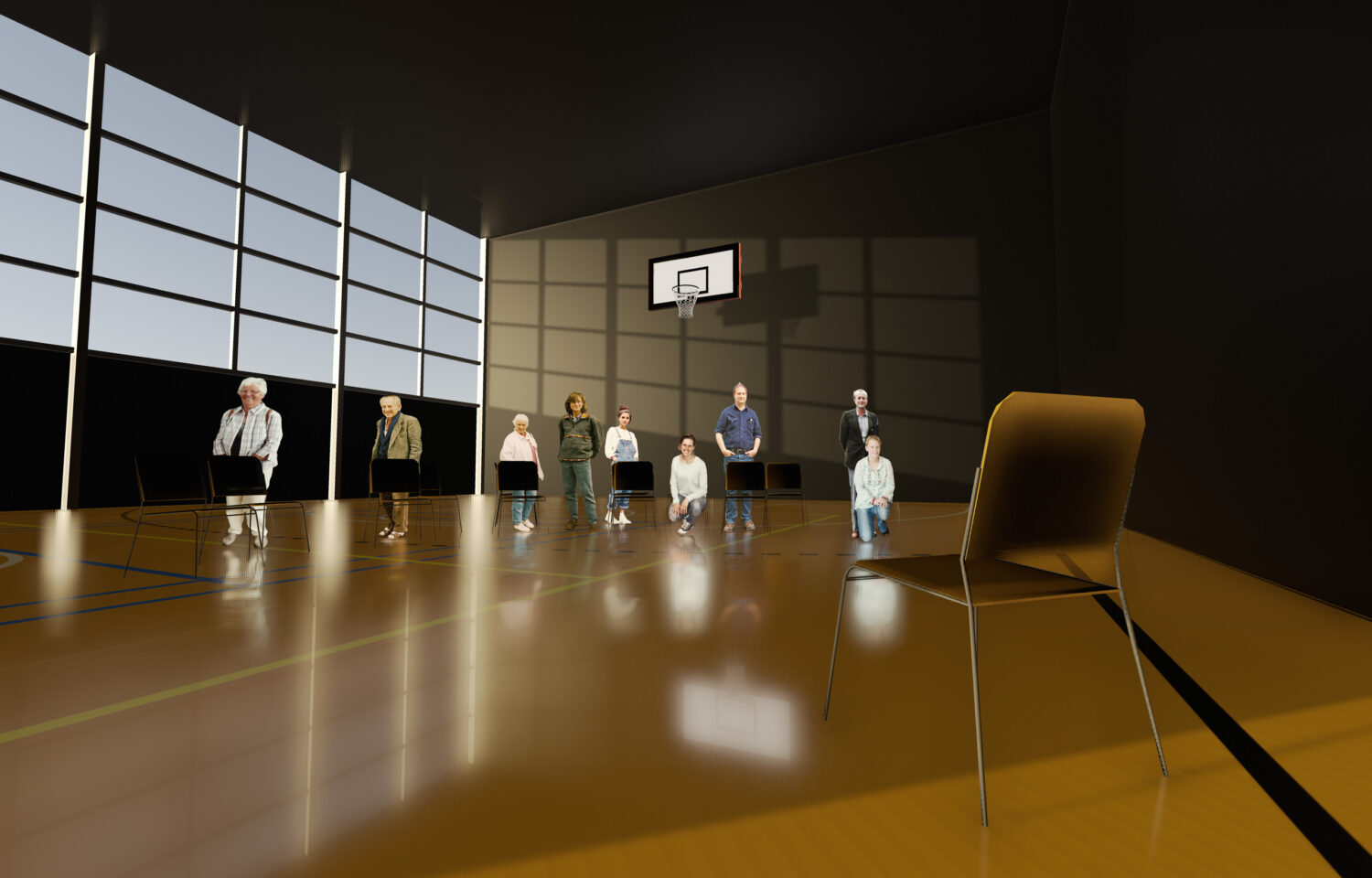 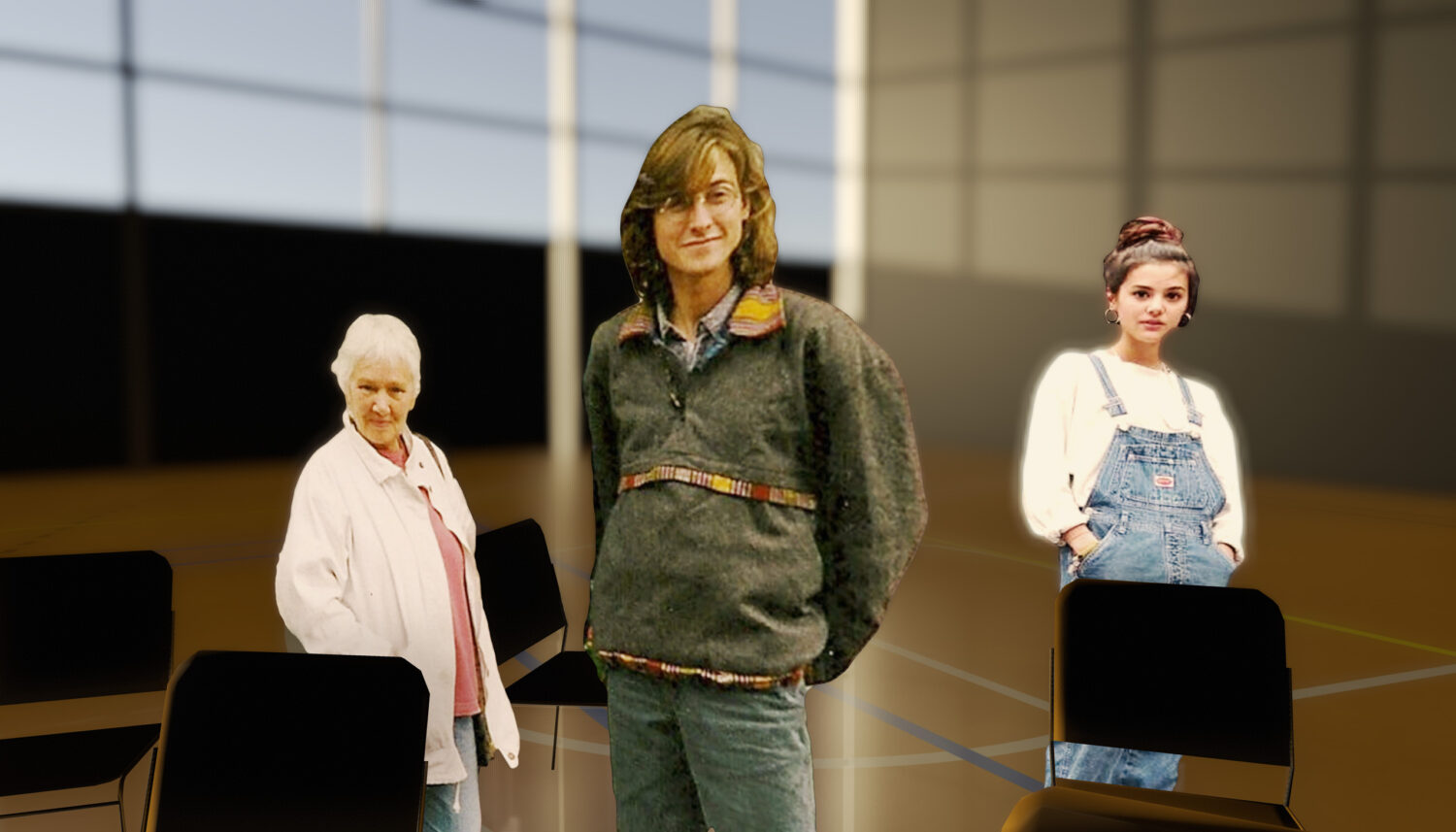 „The future is a system on the brink of collapse.”

‘The Limits to Growth’ is a report of a study carried out by Donella and Dennis Meadows, Jorgen Randers, and William Behrens at the MIT System Dynamics Lab. Based on a computer simulation using the ‘World3’ model, the study predicts that the global system of nature probably cannot support present rates of economic and population growth much beyond the year 2100. The future scenarios presented in the book were hugely influential and became a focal point for the environmental movement during the 1970s and 80s. The book has been translated into 30 languages and sold over 30 million copies. What are the limits to simulation? What kind of growth trajectories would be preferred and by whom? Are predictions only existent when they are maximally disseminated? Is there a Malthusian spirit in certain forms of environmentalism and critiques on growth? 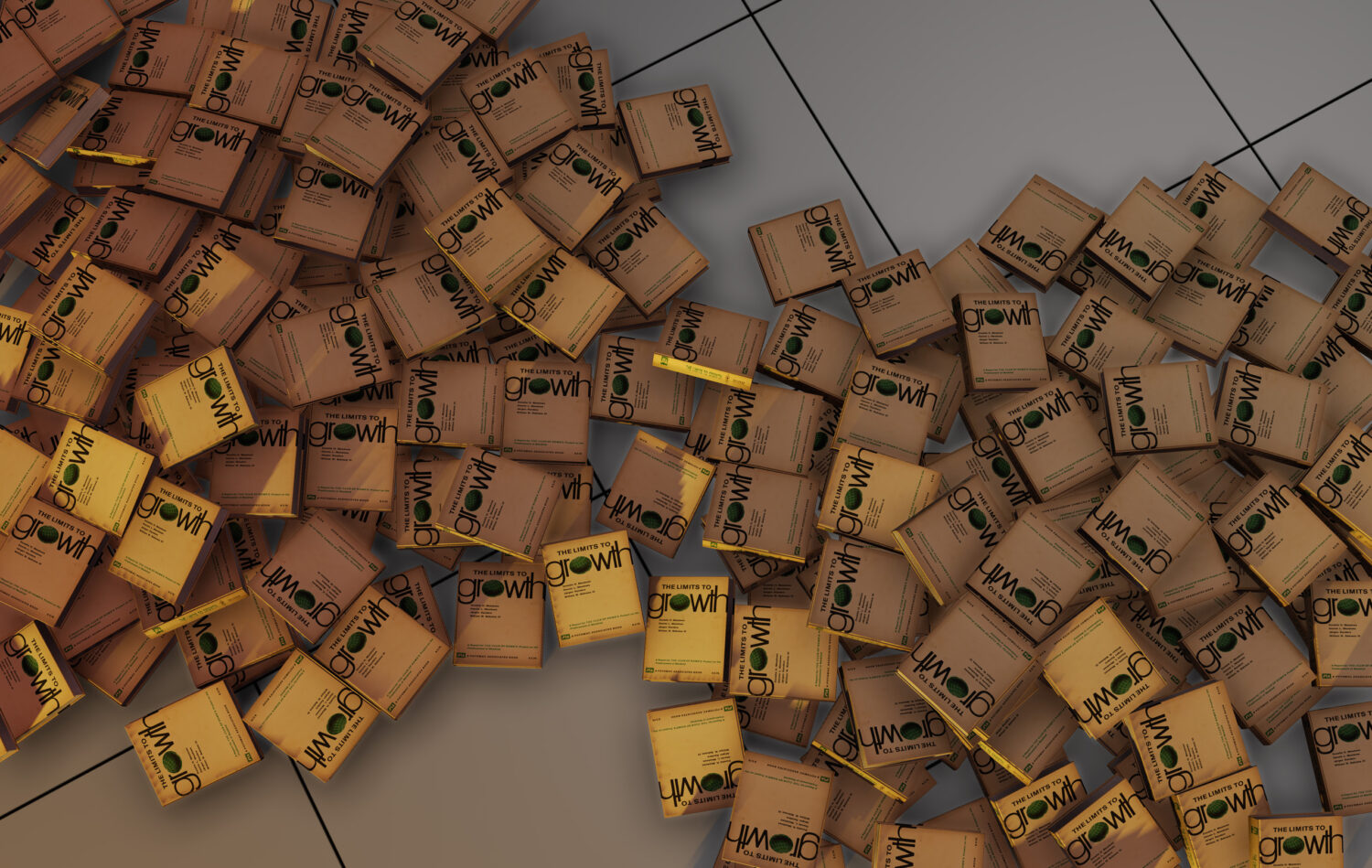 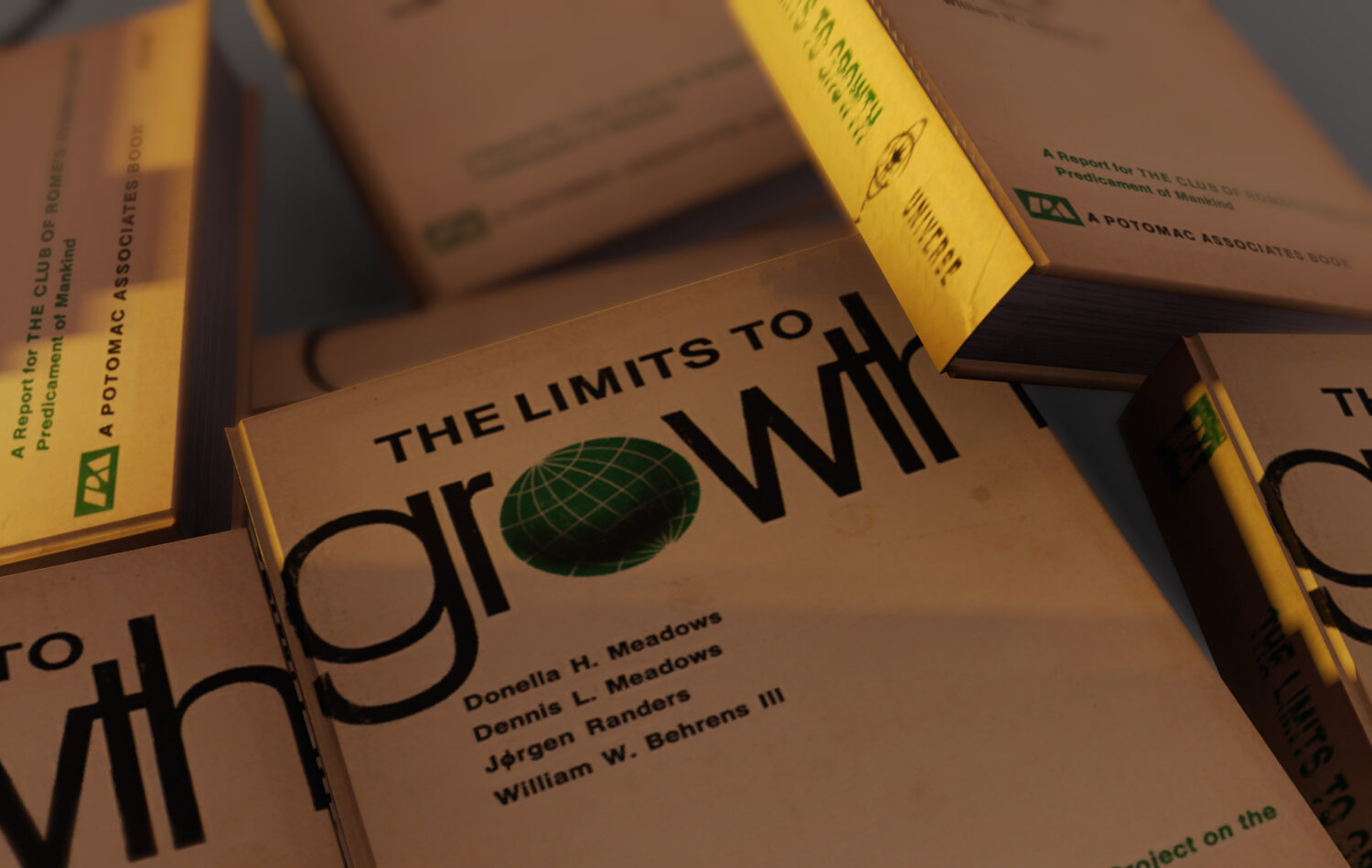 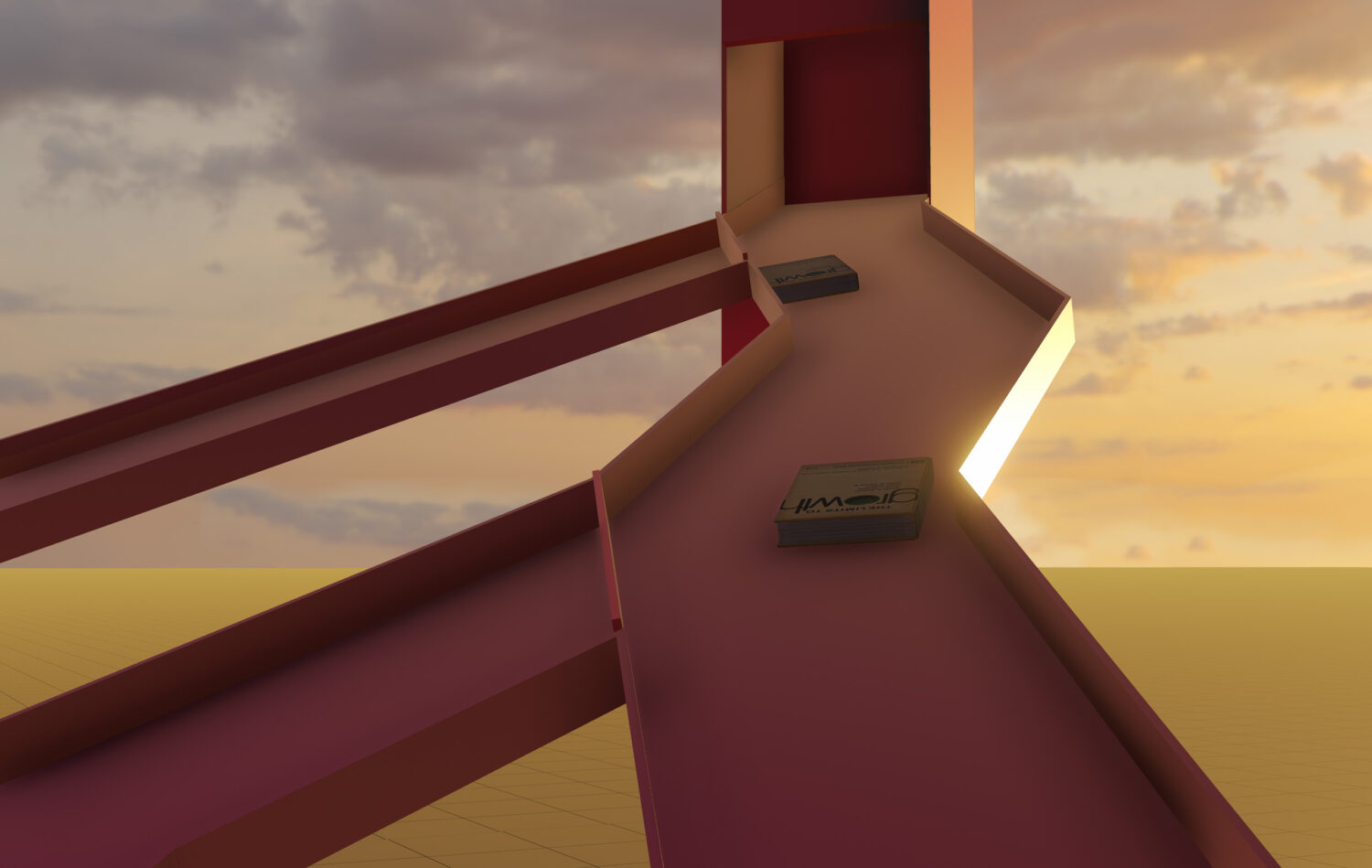 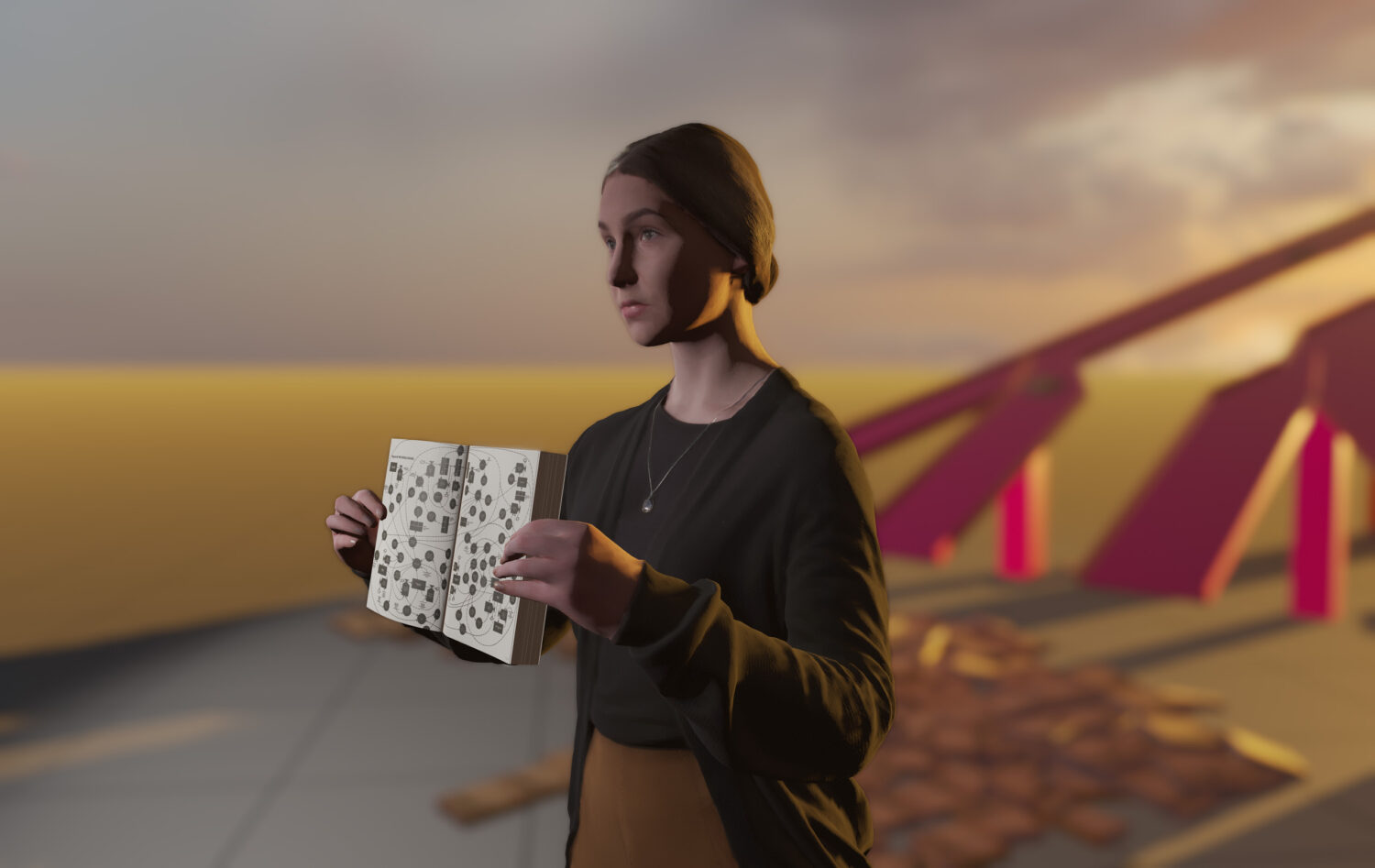 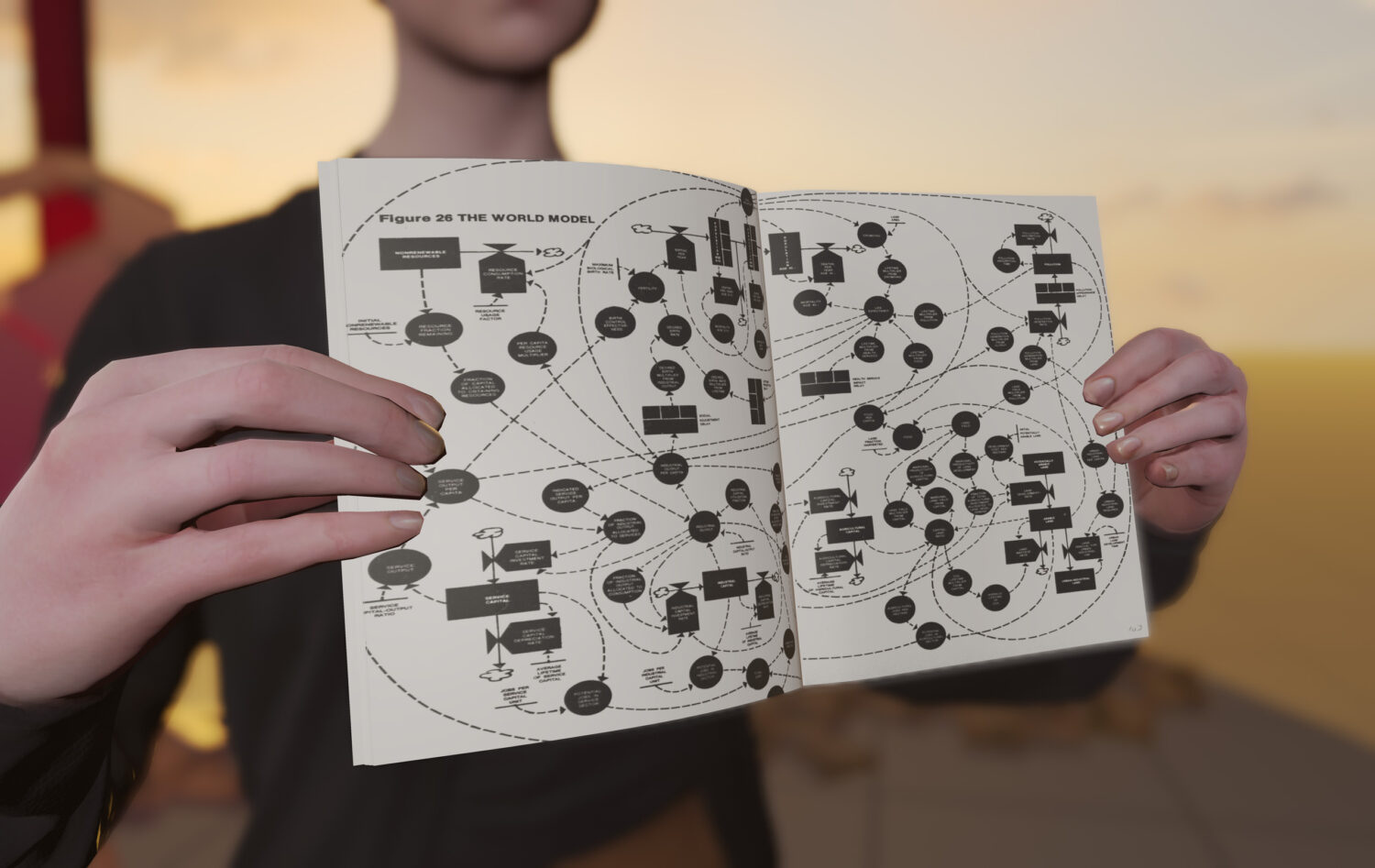 „The Future is a construction of the human brain.”

In 1848 the brain of the mine worker Phineas Gage was pierced by an iron rod. He survived the accident with parts of his cerebrum lost. The once polite man turned into a rude person being unable to foresee the consequences of his actions. The tragedy led to important advances in the understanding of the brain, most importantly the realisation that personality traits could be localised in the brain. Contemporary findings in neuro-sciences show that these brain networks are responsible for many kinds of mental self-projection: episodic memory, navigation, empathy and counter-factual speculation. With advances in neuro-science, will we be able to understand more about these important functions of the human brain? Could there be detailed, scientific descriptions of the human capacity to speculate? Could there also be an interest in suppressing these brain networks in order to live in the now, as desired by hedonistic interests? 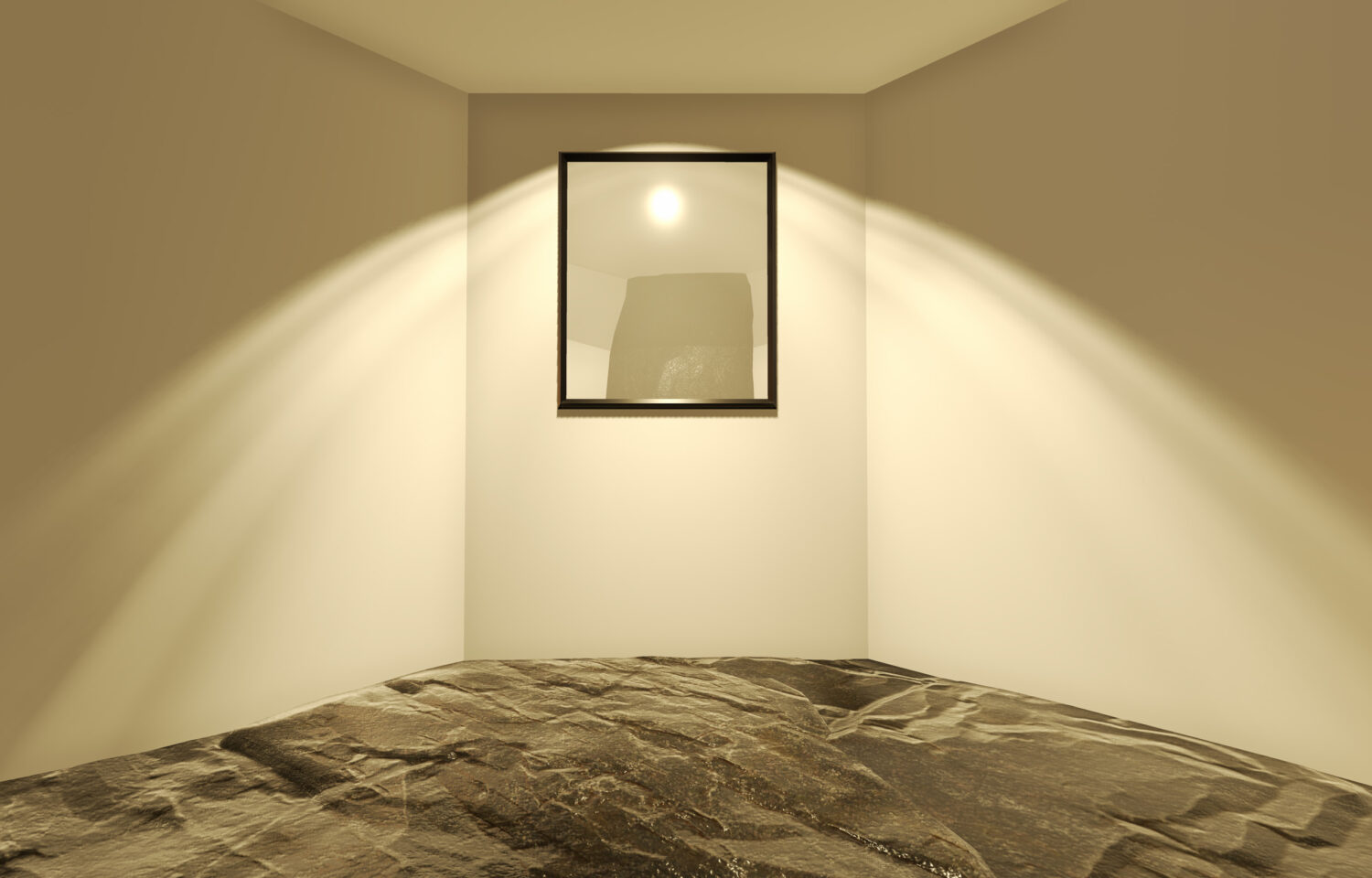 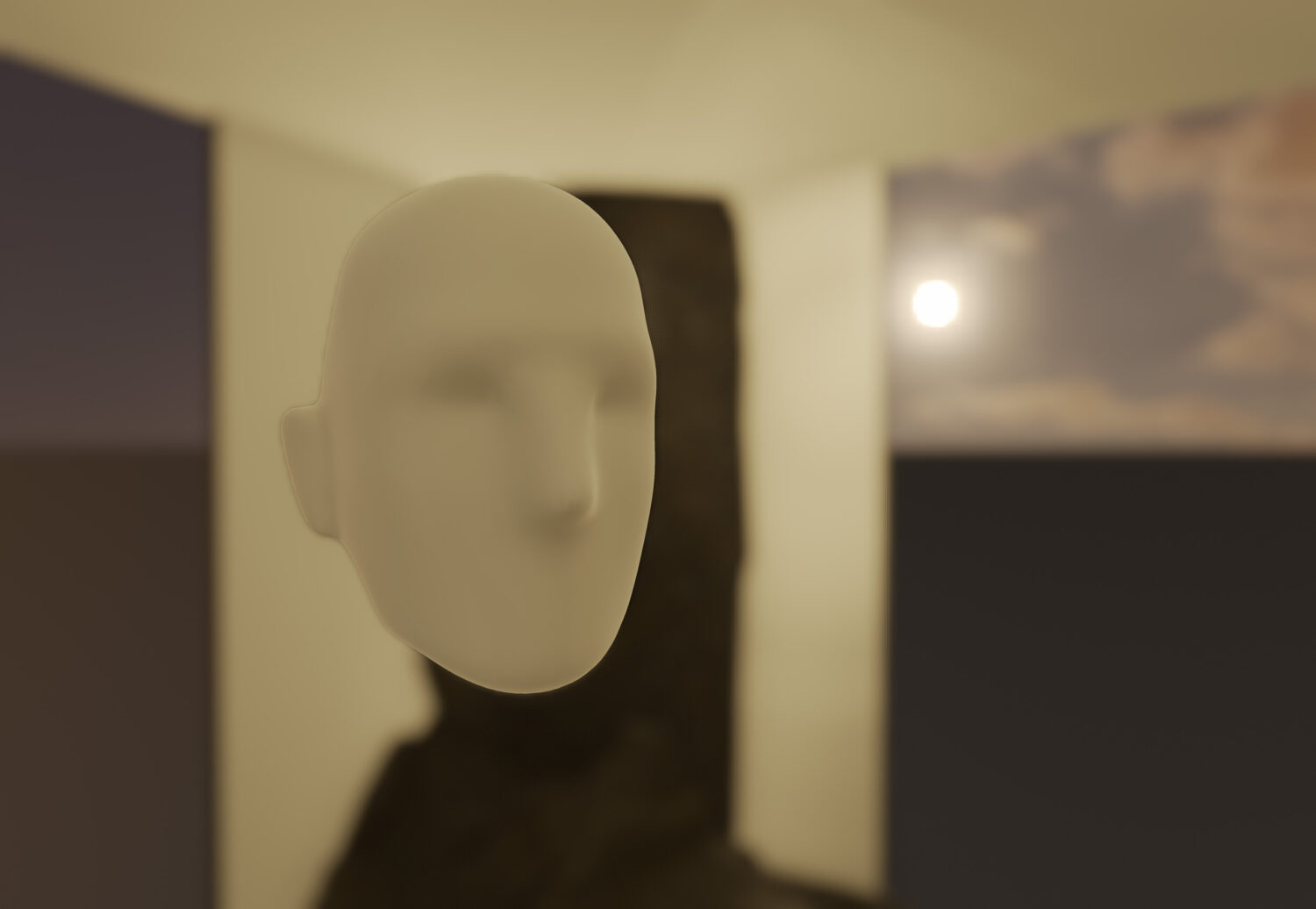 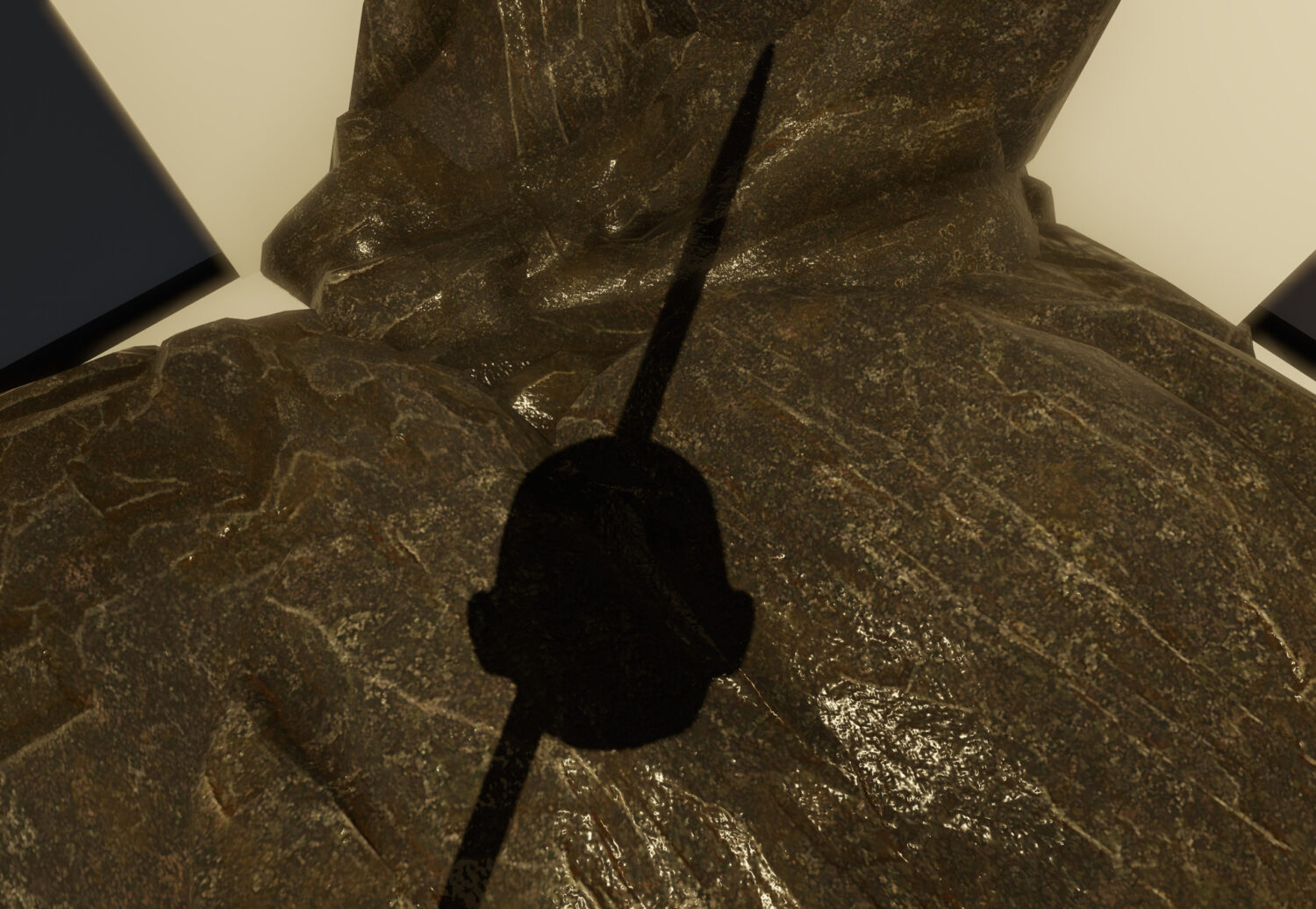